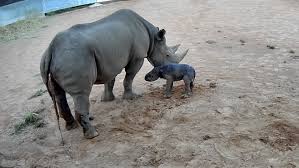 A rare black rhino calf was born at the Taronga Western Plains Zoo in the New South Wales.

Taronga Zoo director Steve Hinks said that the calf was born on February 24 and is the fourth calf for its mother Bakhita in six years.

“Every birth for this critically endangered species is so important with fewer than 6,000 remaining in the wild. So whilst this is incredible news for Taronga Western Plains Zoo, this is also incredibly important news for the species as a whole.”

There are only a few thousand Black Rhinos left in the wild.