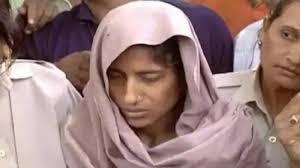 Uttar Pradesh’s Shabnam will be the first Indian woman who will be hanged to death after India’s independence.

She is one of the two convicts in the Amroha murder case.

Shabnam, a school teacher, was found guilty of murdering seven members of her family along with her lover Salim.

“If the death sentence is carried out as expected by jail officials, Shabnam could be the first woman convict to be hanged after Independence.”

Shabnam’s family were against her relationship with Salim due to the difference in their educational, social and economic status.

Shabnam, a double MA (English and Geography), is the daughter of a Pathan Master Shaukat Ali while Salim belongs to the saifi fraternity.

Before going to sleep, Shabnam gave sleeping pills to her family members in their tea. After that she called her boyfriend in the house and brutally killed seven members of her family with an axe.

Both were arrested and sentenced to death by the trial court in 2010.

The death sentence was upheld by the Supreme Court in 2015.

Shabnam and Salim’s mercy plea was rejected by Rashtrapati Bhavan.

In January 2020, the Supreme Court turned down their review petitions.

The court noted that Salim “meticulously executed the killing after Shabnam administered sleeping pills in tea”.

“The devilry was with the desire to see that no legal heir except Shabnam remains alive. They wanted to grab the property of Shabnam’s parents who were against their marriage.”

The Print tried reaching Shabnam’s lawyer Shreya Rastogi, who refused to delve into details of the case.

According to data compiled by the research organisation Project 39A of National Law University, Delhi, India has sent more than 750 men to the gallows since 1947.

A 2016 survey had indicated there were only 12 women on the death row.

Meerut’s Pawan Jallad, the hangman of the 2012 Delhi gangrape and murder case convicts, has been asked to put Shabnam to the gallows.