Knowledge about aromatic plants reached China when Indian medicinal texts were taken and translated over the centuries. It resulted in Indian Acharyas being revered as gurus and even worshipped gods.

Coronavirus, a disease has terrorised the world struggling hard to find its cause and remedy. It emerged suddenly, infected lakhs and even killed thousands. The media brings shocking news, every day. Thousands in critical condition are to be treated; medical facilities are crumbling; the world is up in arms to stop the contagious disease trying hard to find causes behind it.

Destruction of ecological balance, violation of ozonosphere, shortage of freshwater, and extinction of biological species is endangering human existence. The world accepts that following the western philosophy of accepting man as master of nature, we have damaged the fabric of nature and have even intruded into the animal world.

It is a world of scientific advancement with an open mind. Let us pause and think if there was or can be any possibility of any solution in the Eastern mode of thought and practice. The question is— are there any leads to researches to find remedies in such situations.

When I received a message from a friend in Singapore that people in Chinese monasteries are performing homam to contain the disease, felt duty-bound to write this article as an answer to the question— do we need to have faith in Indian medical science, its scientific culture, practices, and connect between science and spirituality.

Where science stops spirituality begins to work. Many scientists are doing research on ancient Indian practices, mapping them scientifically, and showing positive results, acknowledging ancient Indian ways and means to protect the environment to save humanity from infections and viruses through havan/homa, planting specific trees and plants, boosting immunity to fight diseases through pranayama and yoga etc.

The list is long but here I am focusing on the Chinese historical chronicles that acknowledge Indian sciences and scientists controlling contagious diseases and epidemics.

There has been a dialogue among civilizations over the past centuries. Chinese historical chronicles refer to curing diseases, stopping storms and epidemics, protection from fatal strikes of lightning etc. by Indian Buddhist masters.

It happened with the entry of Buddhism which was taken to China to mitigate suffering and make the people happy wiping tears of agony and distress from the eyes of the people.

Apart from sowing the seeds of love and compassion, meditation and enlightenment, democracy and equality, social reforms and imperial virtue, cheering up the downtrodden, introducing temple culture and monastic structure, medical science penetrated deep into the Chinese system.

An Indian Acharya presented a perfume to the Chinese Han Emperor Wu during 2nd-1st century BC. At first, the Emperor was not much attracted to the egg-like presents. Just then a severe epidemic broke out in Ch’ang-an taking away many lives.

The Indian asked the Emperor to burn that. Its fumigation stopped the epidemic and even resurrected the dead. Its perfume spread to an area of 50 kilometres and its effect lasted for three months.

The Emperor was grateful, conferred great honours on the Indian guest, presented a special dinner, and bid farewell to him. This is given in the “Collection of Information on Things of Universe” written by Zhang Hua (232-300AD).

A Chinese historical record “General Records of Buddhist Patriarchs” was compiled in 1296. It gives details of the activities of Indians in China. According to it a monk from India, Hala Haraka/Hari Vikrama helped the Chinese to stop a terrible epidemic with medicine and charms/mantras in Loyang, an Imperial city of Northern China in 287. It stopped a devastating epidemic in the Imperial capital Chang-an and saved thousands of lives. Such events indicate a great reputation of Indian perfume medicine and fumigating with them in ancient China.

An Indian Acharya Jivaka went via sea route and arrived in Loyang. He became famous as a doctor who could cure incurable diseases around 306 AD. He treated the Governor of Hengyang province Teng Yongen. He was not able to walk because of a problem in his foot being paralyzed for many years.

This is detailed in the historical work “Biographies of Eminent Monks”, an important work on Indo-Chinese relations. It contains information about 257 monks, both Indian and Chinese who played a key role in the dissemination of Indian culture to China.

Apart from curing incurable diseases, there are references to Indian magicians performing rejoining of the severed tongue, spitting fire, swallowing a knife and rejoining broken cloth.

Another Indian Acharya Buddhchinga was a great doctor, an astronomer and an astrologer. Looking at his capacities he was known as a magician. He had studied in Kashmir under famous Buddhist masters. He could recite scriptures in millions of words. He had reached the then capital of China Loyang in 310 AD.

At that time the ruler Shi Le was helped by Buddhachinga to win battles and get his army cured suffering from a contagious disease. When he cured Shi Le’s army of infectious disease people were so impressed that they embraced Buddhism en masse.

Shi Le appointed Buddhachinga as Rajya Guru. Shi Le’s successor was bestowed even greater honours and patronage on him. He used to attend court sessions, crown prince and top courtiers used to escort him, was given a standing ovation when entering the court and was offered a seat by the side of the Emperor. Courtiers used to address him as a great monk. There was so much enthusiasm that Buddhaching could build 893 temples in North China. The Chinese historiography remembered him as “Shengsheng” meaning ‘divine monk’. His disciples actively worked in China following the footsteps of their guru.

Indian perfumes began to enter China in 98 BC when the Kushana Empire presented a magic incense to the Imperial court of the Han Dynasty.

A guest from India to China presented three pieces of incense that resurrected many dead to life in the capital of Ch’ang-an during an epidemic. Chinese began to use Chandan calling it zhantan; turmeric and coriander became a part of Chinese cuisine. Turmeric was called yujinxiang meaning fragrance that gathers gold.

Pilgrims, donors and lay disciples engaging in religious activities were called ‘having a date with fragrant fire’. People addressed each other as ‘brothers in the fragrant fire’. There is a clear indication of performing havans, acceptance of their impact and popularity in China.

INTRODUCTION OF AYURVEDA IN CHINA

Medicine in India was a well-developed science and it reached China.

Acharya Dharmarksha edited and translated ‘Classic on Four Hundred and Four Diseases of Human Body’ and ‘Classic on the Path to Cultivation’. He also recorded the pathogenesis theory of Buddhist medicine. It was followed by several other works including those compiled by Chinese Emperor Wu.

The Indian masters were welcomed because of their curing skills.

China had developed its medical system and it could be benefitted from the Indian prescriptions extensively. Wang Tao (670-755 AD) compiled ‘Important Secret Prescriptions’. During Sui and T’ang Dynasties many Indian medical theories reached China.

Chinese were impressed by the Indian treatment of cataract extraction with needles often performed by Brahmana monks, meaning non-Buddhist. Poet Liu Yuxi even wrote a poem in praise of a doctor when he was treated for his eyes.

The Discovery of Sanskrit manuscripts called Bower Manuscripts from Kucha, now in the Chinese Xinjiang region opened up a new path of researches in Central Asia.

It is a fifth-century medical manuscript written on birch bark in Brahmi script in the Sanskrit language. The second is on predicting the future by dicing- Pashak Kevali and the third is on remedy from a snake bite – Mahamayuri-vidya-ragyi. Like Jivaka Pustaka and Siddhasara Bower manuscript also plays an important role in researches on Chinese medicine.

Astro-medicine was practised in India and travelled abroad. It is still practised by Tibetan doctors. In the period of the Northern Dynasty, the Chinese Dharma Branch translated 20 volumes of Brahmana Astronomy.

MEDICINAL VALUE OF AROMATIC PLANTS – FROM INDIA TO CHINA

Knowledge about aromatic plants reached China when Indian medicinal texts were taken and translated over the centuries. They played an important role in the development of Chinese medicine. It resulted in Indian Acharyas being revered as gurus and even worshipped gods.

In China saffron was used for medicines, flavouring and colouring during religious ceremonies. It could expel all foul odour, and get rid of impure air, and diseases in the body.

Itsing, a Chinese pilgrim to India describes that haritaki grew mostly in the west, saffron grew in the north and the west abounded in asafetida. He has also recorded many fragrant medicines and cardamom. Kashmir was famous for dragon stud horses, saffron, fireballs and herbs. 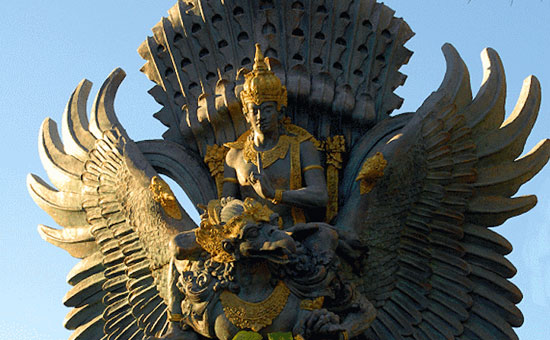 The Indian myth of Garuda was prevalent in China because of faith in its power of protecting from calamities and diseases.

There is a chapter on the ‘Law of Garuda’ in a Buddhist text of Arya-manjushri-mulakalpa. It was popular in China for many centuries.

One of the Chinese pilgrims, coming to India in search of scripture, Itsing translated it. Dharmabhadra, an Indian acharya of the tenth century and several others also translated it. Garuda became a symbol in Chinese painting. One can see it painted in the Yonghe Palace temple in Beijing. Many Ming dynasty temples have also preserved this theme. The ruling elite liked to subsume the power of Garuda to strengthen the political authority.

The Annals of Sui Dynasty mentions that a book entitled “Prescriptions of Bodhisattva Nagarjuna”, a text on astronomy and Indian medicine were presented to the T’ang Emperor Xuangzong I in 719 AD by an envoy from Kapisha.

A famous classic on Chinese medicine contains a discourse on Indian medical theories and prescriptions. It states that prescriptions given by Brahmanas were quite attractive for the Chinese. In 752 AD Wang Tao collected all the available prescriptions that were used till then. They were meant for curing diseases of ears and eyes and could turn grey hair into black.

Annals of the Sung Dynasty are valuable to search India’s contribution to Chinese science and technology. It was the time when contacts between Cholas and Sung China were at their peak. It has a chapter specifically on Cholas.

There are other books i.e. calendar by Gautama Siddhartha, a treatise written on a pulse by Jivaka, sixty-four question answers by him, a treatise on eye diseases, important prescriptions, and treatise on the entrails. This was a time of much interaction.

Even Indian games like throwing dice and others reached China. Itsing has mentioned prescriptions to cure diseases like deafness and blindness using lotus herbal ointment. In some prescriptions, basil leaf, green cinnamon, and sweet gum are mentioned with other herbs.

There is a lot of archival material to search and translate into Hindi and English to highlight India’s contribution to containing epidemics and contagious diseases. It may be helpful in future.

This article was first published in the May 15, 2020 issue of the Bhavan’s Journal and we have republished it from esamskriti.com. The article is courtesy and copyright Bharatiya Vidya Bhavan, Mumbai 400 007.